Hi everyone. Here's an update on one of the projects I am working on right now.
To make my sites more responsive to all devices, including mobile phones, I am slowly updating my sites, and I invite you to visit the new version of my site, www.trainyouraccent.com.
Eventually, I will do all of them, but I am starting on one of the smaller sites first. Please let me know how the site works for you.
Posted by Randall Davis at 12:55 PM 1 comment: 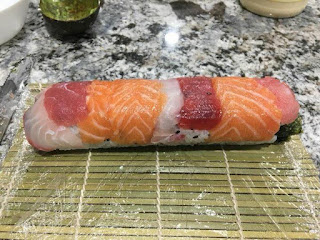 My wife, Shirley, has a real gift in the kitchen (and beyond), and she enjoys sharing her talent.
Last night, we had some family over for a “sushi night,” where people learn to prepare and put together their own rolls. Tuna, salmon, eel, and other delights. (We now hope to have other family over for Mexican night or other. Who knows.)
I think everyone left stuffed, and the good company made it even better. When I was growing up, there would have been no way I would have tried to eat a slimy piece of raw fish; I would have gagged mightily, and would have had terrible nightmares thinking about it. I would have probably preferred to eat rocks, liver, and the like before raw, uncooked, unseasoned, unprocessed, and un-you-know-sea-creatures.
If I had been on a deserted island, I would have probably starved to death while fish swam freely along the beaches. (You can only live on coconuts for so long.) That was the level of my thoughts regarding sushi years ago.
But now, you just can’t beat the taste.
What kinds of foods do you enjoy?
Posted by Randall Davis at 12:54 PM No comments: