I'm adding some new recordings to my Web site, www.dailyesl.com. This new one focuses on wedding traditions in some places in the United States. Give it a try:

http://www.dailyesl.com/wedding.htm
Posted by Randall Davis at 8:20 AM No comments: 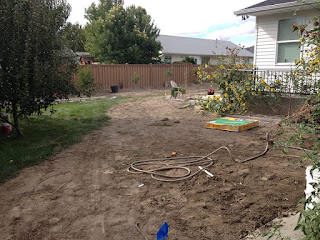 I enjoy gardening, but I don't know a whole lot about landscaping and sprinkler systems, so right now we are having some work done on our yard. It's coming well, and thing should be done soon. On a similar topic, I created a listening conversation on a related topic in which a man takes landscaping into his own hands with disastrous results. Give it a try:

http://www.esl-lab.com/landscaping/landscapingrd1.htm
Posted by Randall Davis at 8:40 AM No comments:

Back in April, I completed a 100-mile trail race in western Utah called the Salt Flats Endurance Run 100. Basically, you had to run, walk, and/stumble for 100 miles (160 kilometers) in the western desert of Utah. It was cold and windy, especially during the darkest parts of the night when your body just wanted to curl up in a ball next to the fire at the aid stations and drift into oblivion.
Participating in the race was a highlight of the year, but it was also an experience that made constantly question my ability throughout. I could constantly hear a voice inside subtly whispering in my ear to just call it quits, and beating back that relentless impulse----telling the voice to just shut up----was at times almost impossible because I was exhausted to the point of almost falling asleep on my feet.
Here is a short video of the race. I didn't get video at the lowest, most emotionally-draining, moments during the event, but it will give you a small snapshot of what it can be like to push yourself almost to the breaking point. Fortunately, my wife, Shirley, and daughter, Emily, were there at the end to cheer me on. I wouldn't have been able to drive myself back home that same day without them.

Posted by Randall Davis at 4:59 PM No comments:

Going to the hospital can be one of the most difficult and traumatic experiences of your life. In my newest conversation, you meet a man who has just arrived at the hospital to hear unfortunate news about his wife. Give it a try:

http://www.esl-lab.com/hospitalstay/hospitalstayrd1.htm
Posted by Randall Davis at 7:54 AM No comments: